What does the Bible, and particularly the New Testament, perpetually reveal to humankind?  How did, and does, the Bible positively impact individuals and society?  What concepts would humankind lack if there were no Bible? Answer: Faith, hope, and love (1 Cor. 13).  By the historical revelation of Jesus Christ, the Bible reveals “that they may have life, and more abundantly” (Jn. 10:10). The concepts of freedom (faith), eternal life (hope), and compassion (love) are revealed throughout history through prominent people’s lives, Christian societies, and cultures that reflect the Bible’s legacy, moreover what the Bible continues to teach to humanity.  Christianity is a faith of freedom.

By faith, mountains were moved that became known as Christian Liberty and Liberty of Conscience or more commonly put, freedom.  Biblically, this freedom is an internal, personal, and individual or spiritual freedom.  The concept of freedom throughout history, by the prominent infusing of Christian faith in Europe during the Middle Ages, from its biblical teachings, imbued a pervasiveness of freedom.  This later culminated in the creation and ideals of America.  This historical research reveals how the Bible laid the foundations for the enlightenment of liberty.  This liberty translated to the New Testament’s legacy that impacted the new world and humanity.  This research project may be read here, titled Illuminating the Dark Ages: foundations for the European enlightenment of liberty.

Also, significant to this research is a quote from Protestant Lollard Priest John Ball (c. 1381) in Jean Froissart’s Chronicles as written in the image below.  While I mention Ball, unfortunately, I unintentionally left out the quote in the original final report.  It is important to note Ball's Old Testament reference, “Adem and Eve,” that makes a biblical connection to the uprisings.  It was the Peasant's Biblical understanding of equality that prompted their taking action against “villains” for the “servage” that was imposed upon the “good people”.  Herein lies the premise for the correlation of servitude to the outward expression that was internally realized. 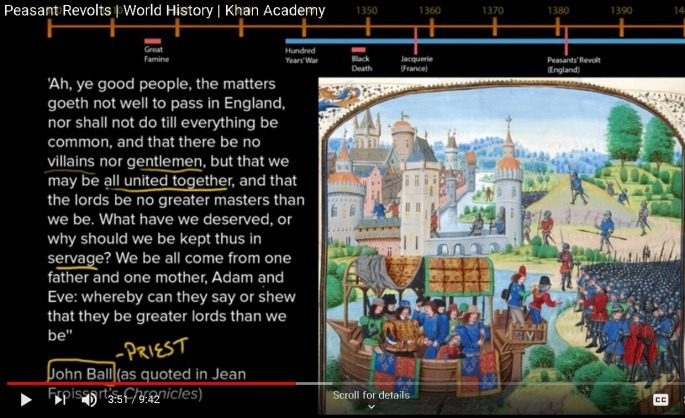 © 2022 Copyright & Disclaimer: libraryofthebible.org (a.k.a Museum and Library of the Bible)