A Milestone in Printing

The production of the Gutenberg Bible sparked a revolution throughout Europe in the way that knowledge was presented and shared.  Previously, books were written and copied by hand.  Johann Gutenberg’s innovative printing press made it possible to create texts on a mass scale with accuracy at an accelerated rate using arrangeable types and special inks.  This enabled the profound content of the Bible to reach an increased number of people at an exponential rate.

Cover and Binding
The Treasure Inside 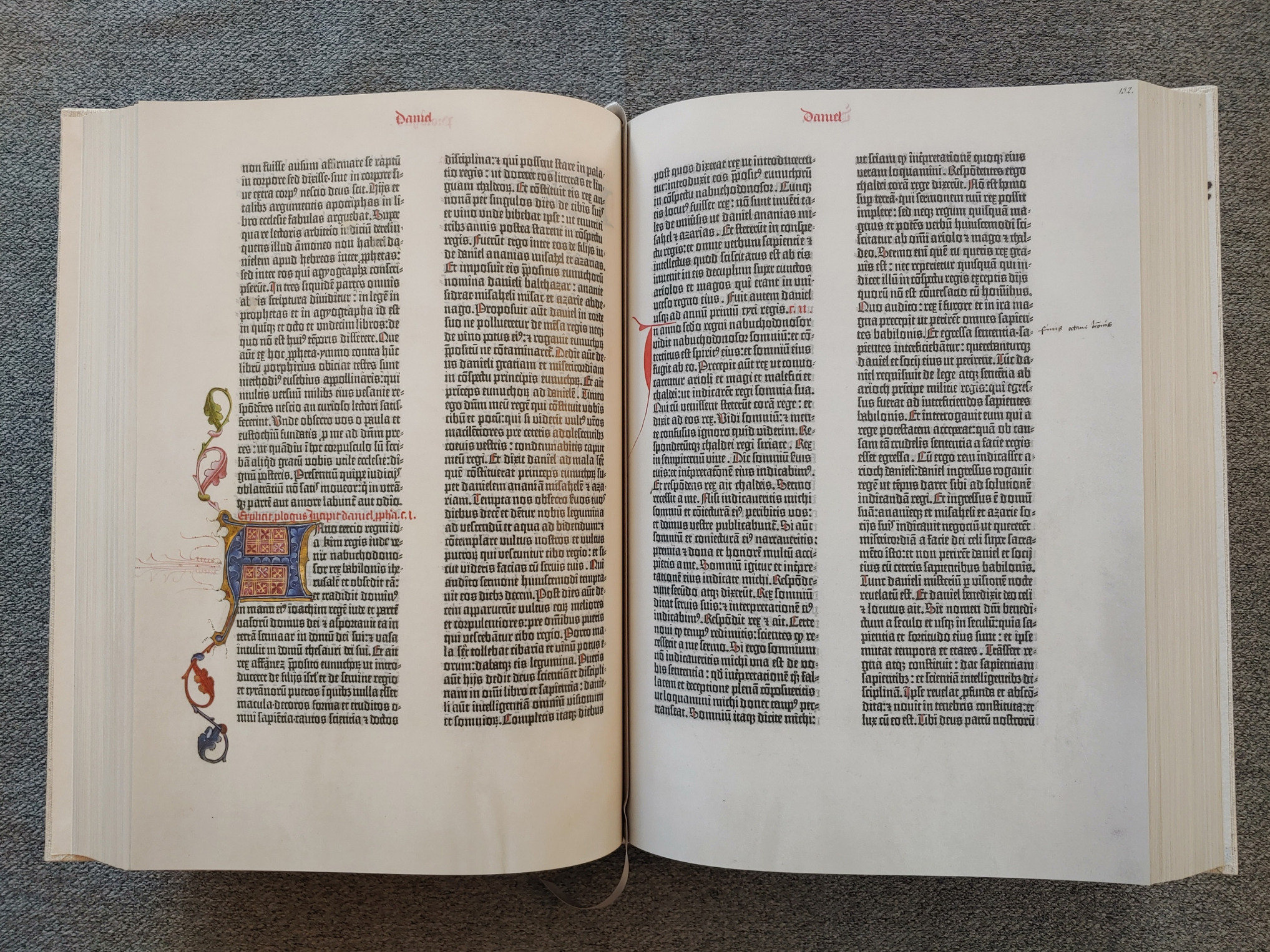 The Göttingen Library edition Bible shown in this exhibit is a facsimile reproduction originally printed by Johann Gutenberg, Mainz, Germany, 1454 A.D.  It is contributed by Stephan Füssel (Taschen Publisher) and listed in the UNESCO Memory of the World program (Click photo to enlarge high resolution).

Igniting a revolution in print

Johannes Gutenberg printed 180 copies of the Bible, only 48 remain, but started a printing and knowledge revolution.  Before his printing press innovation, the manuscript was the practice for all that was written.  There was prior printing done with woodcut, but in the case of Gutenberg, the movable type could be arranged and rearranged which opened a new Bible market.  It was this transition, from calligraphy to print, that enabled mass publication, igniting a revolution of ideas, thought, and knowledge which the Gutenberg Bible likewise announces in the prophecy of Daniel 12:4 “et multiplex erit scientia,” translated, “knowledge shall be increased,” launching humanity into the modern era.

For these reasons, it is essential to reflect on the influence of the Gutenberg Bible.  Two types of Bibles have historical notoriety, novelty, like the lunar, micro, and now nano Bibles; then, there are ones that made history, and the Gutenberg is one that made history.  It was not only the first significant full-length book to be printed, but made the hand copying of books obsolete. 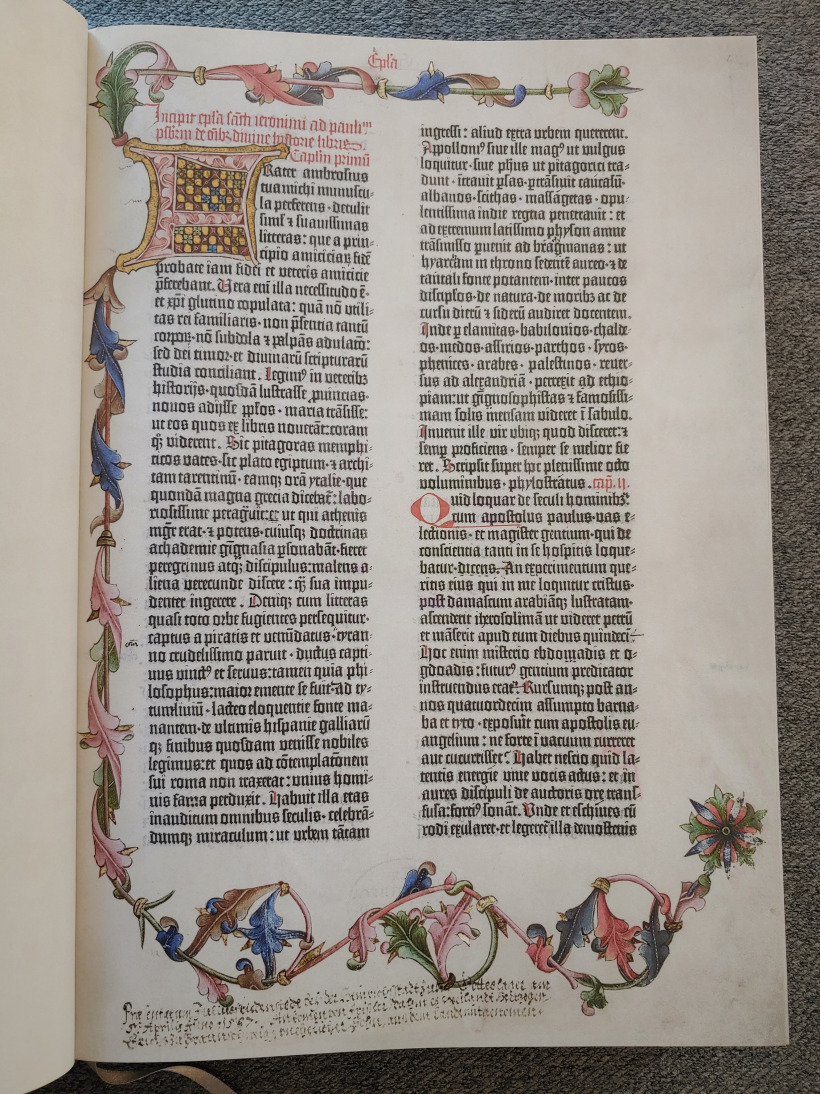 First page Volume 1.  The text is in Latin derived from the Vulgate. 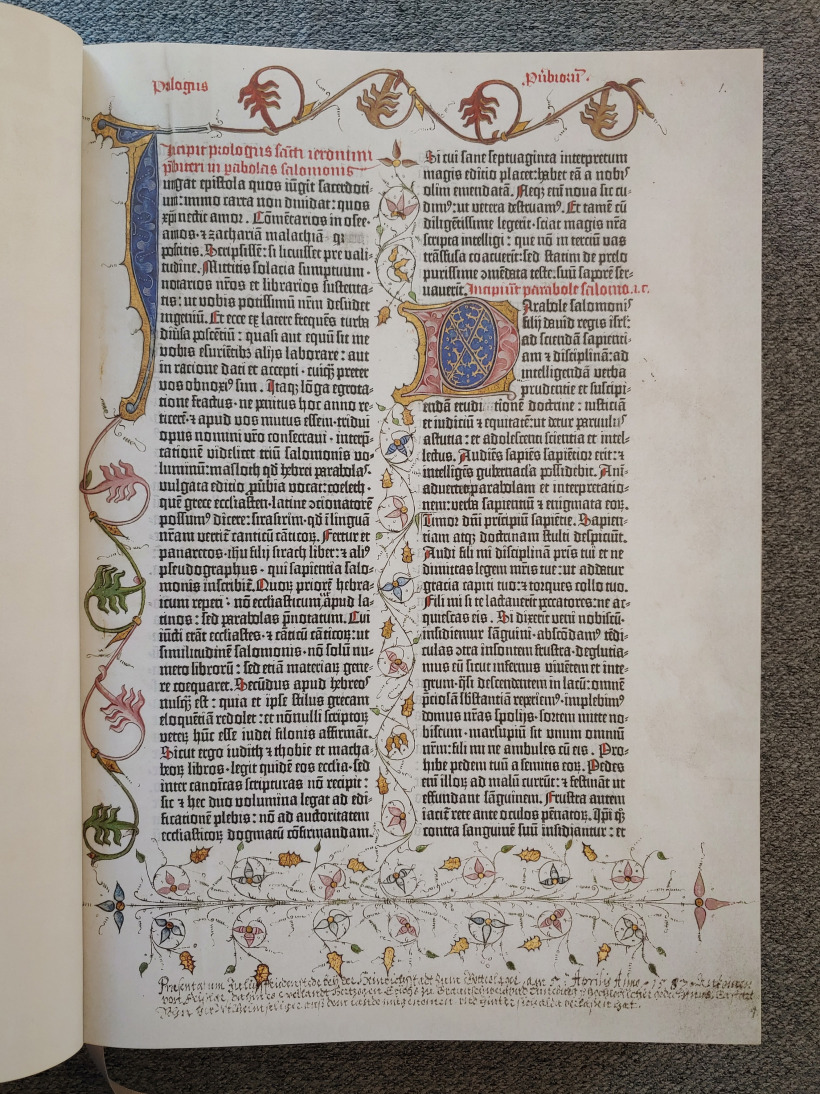 Incunabula - I can't pronounce it, what is it?

Pronounced [ in-kyoo-nab-yuh-luh ] simply is the gold inlay and colorful artwork hand painted on the margins of a page after printing, while rubrication included red emphasis.  Purely for decorative purposes, the artistry subsequently reflected pictures of the text or stories- referred to as illuminations and illustrations, but it was these incunabula that made the Gutenberg Bible a stunningly beautiful work of art.

Why was mass printing so world-changing?

The mass printing of books led to enlightenment or an increase in knowledge and was equivalent to the Internet for the dissemination of knowledge, that spurred a conscious awakening.  Secularly, this enabled for the promulgation of foundational scientific principles that facilitated the application of those truths for humanity.  Whereas, religiously, the printing of the Bible made it more accessible to the commoner or masses; as a result, it effectuated three developments, 1) modernized the preservation of the Scriptures, 2) empowered the Reformation, 3) disseminated biblical knowledge.  With this biblical knowledge, it laid foundational truths establishing a more concrete and comprehensive understanding of Christianity, and the knowledge and experience of God became more personal and practical to individuals in the broader spectrum of Christendom.  The message of love and salvation promulgated a Christian world view that imbued a freedom of conscience to an extent more than ever before.

© 2022 Copyright & Disclaimer: libraryofthebible.org (a.k.a Museum and Library of the Bible)